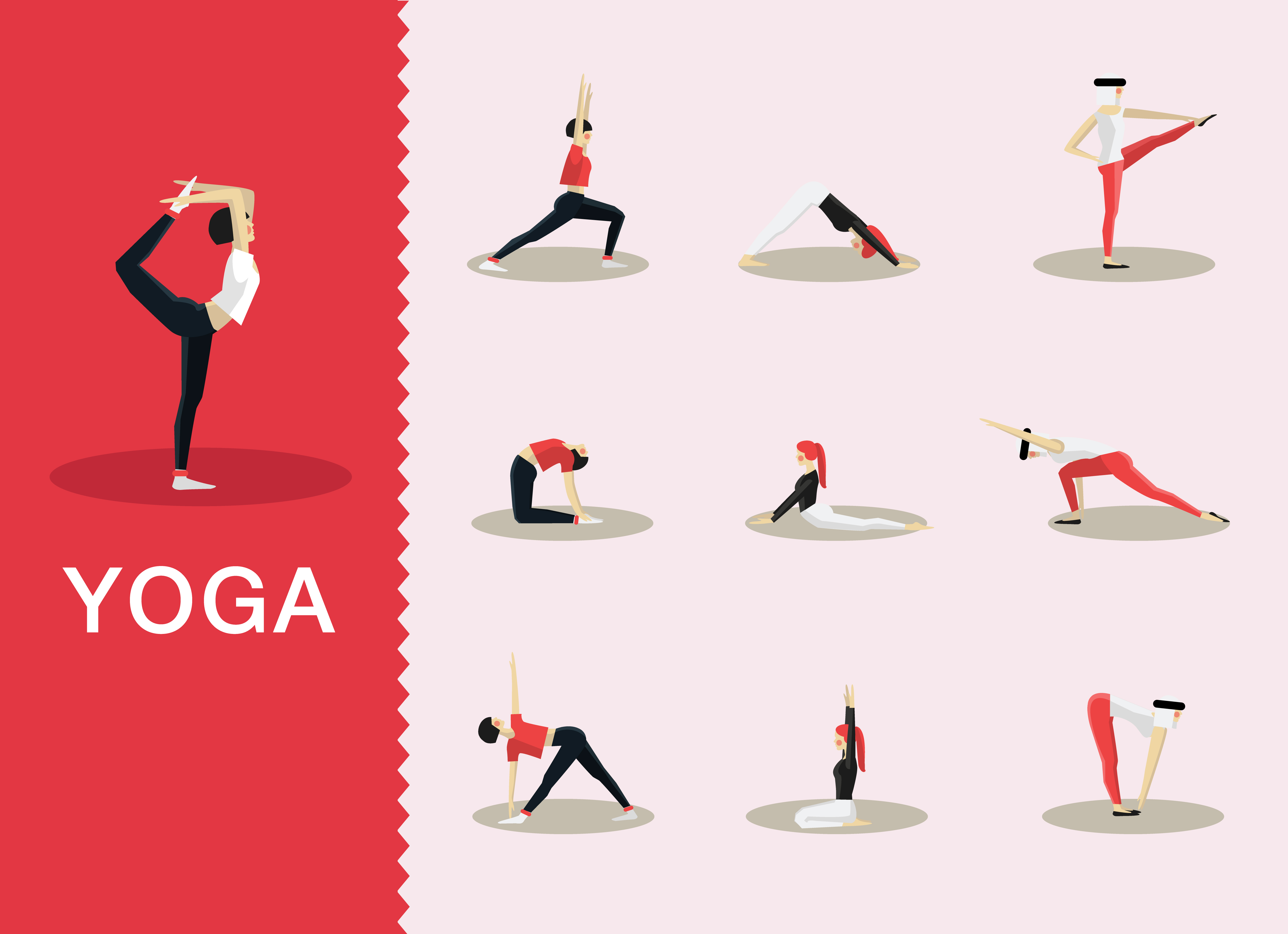 You may be attending a Wicked Fitness yoga class and hear one of our fitness instructors use Sanskrit words for yoga poses (asanas) and concepts. It’s completely normal to think…”Give me yoga in plain English please.” Browse our list of 200 Key Sanskrit Yoga Terms.

Advaita (“nonduality”): the truth and teaching that there is only One Reality (Atman, Brahman), especially as found in the Upanishads; see also Vedanta

Akasha (“ether/space”): the first of the five material elements of which the physical universe is composed; also used to designate “inner” space, that is, the space of consciousness (called cid- akasha)

Amrita (“immortal/immortality”): a designation of the deathless Spirit (atman, purusha); also the nectar of immortality that oozes from the psychoenergetic center at the crown of the head (see sahasrara-cakra) when it is activated and transforms the body into a “divine body” (divya-deha)

Ananda (“bliss”): the condition of utter joy, which is an essential quality of the ultimate Reality (tattva)

Arjuna (“White”): one of the five Pandava princes who fought in the great war depicted in the Mahabharata, disciple of the God-man Krishna whose teachings can be found in the Bhagavad Gita

Ashrama (“that where effort is made”): a hermitage; also a stage of life, such as brahmacharya, householder, forest dweller, and complete renouncer (samnyasin)

Avadhuta (“he who has shed [everything]”): a radical type of renouncer (samnyasin) who often engages in unconventional behavior

Bandha (“bond/bondage”): the fact that human beings are typically bound by ignorance (avidya), which causes them to lead a life governed by karmic habit rather than inner freedom generated through wisdom (vidya, jnana)

Bhagavad Gita (“Lord’s Song”): the oldest full-fledged yoga book found embedded in the Mahabharata and containing the teachings on karma yoga (the path of self-transcending action), samkhya yoga (the path of discerning the principles of existence correctly), and bhakti yoga (the path of devotion), as given by the God-man Krishna to Prince Arjuna on the battlefield 3,500 years or more ago

Bhagavata-Purana (“Ancient [Tradition] of the Bhagavatas”): a voluminous tenth-century scripture held sacred by the devotees of the Divine in the form of Vishnu, especially in his incarnate form as Krishna; also called Shrimad-Bhagavata

Bhakti-Sutra (“Aphorisms on Devotion”): an aphoristic work on devotional yoga authored by Sage Narada; another text by the same title is ascribed to Sage Shandilya

Bhakti Yoga (“Yoga of devotion”): a major branch of the yoga tradition, utilizing the feeling capacity to connect with the ultimate Reality conceived as a supreme Person (uttama-purusha)

Bindu (“seed/point”): the creative potency of anything where all energies are focused; the dot (also called tilaka) worn on the forehead as indicative of the third eye

Bodhi (“enlightenment”): the state of the awakened master, or buddha

Bodhisattva (“enlightenment being”): in Mahayana Buddhist yoga, the individual who, motivated by compassion (karuna), is committed to achieving enlightenment for the sake of all other beings

Brahma (“he who has grown expansive”): the Creator of the universe, the first principle (tattva) to emerge out of the ultimate Reality (brahman)

Brahmacharya (from brahma and acarya “brahmic conduct”): the discipline of chastity, which produces ojas

Brahman (“that which has grown expansive”): the ultimate Reality (cf. atman, purusha)

Brahmana: a brahmin, a member of the highest social class of traditional Indian society; also an early type of ritual text explicating the rituals and mythology of the four Vedas; cf. Aranyaka, Upanishad, Veda

Buddha (“awakened”): a designation of the person who has attained enlightenment (bodhi) and therefore inner freedom; honorific title of Gautama, the founder of Buddhism, who lived in the sixth century B.C.E. Buddhi (“she who is conscious, awake”): the higher mind, which is the seat of wisdom (vidya, jnana); cf. manas

Cin-mudra (“consciousness seal”): a common hand gesture (mudra) in meditation (dhyana), which is formed by bringing the tips of the index finger and the thumb together, while the remaining fingers are kept straight

Cit (“consciousness”): the superconscious ultimate Reality (see atman, brahman) Citta (“that which is conscious”): ordinary consciousness, the mind, as opposed to cit

Darshana (“seeing”): vision in the literal and metaphorical sense; a system of philosophy, such as the yoga-darshana of Patanjali; cf. drishti

Deva (“he who is shining”): a male deity, such as Shiva, Vishnu, or Krishna, either in the sense of the ultimate Reality or a high angelic being

Devi (“she who is shining”): a female deity such as Parvati, Lakshmi, or Radha, either in the sense of the ultimate Reality (in its feminine pole) or a high angelic being

Diksha (“initiation”): the act and condition of induction into the hidden aspects of yoga or a particular lineage of teachers; all traditional yoga is initiatory

Drishti (“view/sight”): yogic gazing, such as at the tip of the nose or the spot between the eyebrows; cf. darshana

Duhkha (“bad axle space”): suffering, a fundamental fact of life, caused by ignorance (avidya) of our true nature (i.e., the Self or atman)

Goraksha (“Cow Protector”): traditionally said to be the founding adept of hatha yoga, a disciple of Matsyendra

Granthi (“knot”): any one of three common blockages in the central pathway (sushumna-nadi) preventing the full ascent of the serpent power (kundalini-shakti); the three knots are known as brahma-granthi (at the lowest psychoenergetic center of the subtle body), the vishnu-granthi (at the heart), and the rudra-granthi (at the eyebrow center)

Guna (“quality”): a term that has numerous meanings, including “virtue”; often refers to any of the three primary “qualities” or constituents of nature (prakriti): tamas (the principle of inertia), rajas (the dynamic principle), and sattva (the principle of lucidity)

Guru (“he who is heavy, weighty”): a spiritual teacher; cf. acarya Guru-bhakti (“teacher devotion”): a disciple’s self-transcending devotion to the guru; see also bhakti Guru-Gita (“Guru’s Song”): a text in praise of the guru, often chanted in ashramas

Guru-Yoga (“Yoga [relating to] the teacher”): a yogic approach that makes the guru the fulcrum of a disciple’s practice; all traditional forms of yoga contain a strong element of guru-yoga

Hamsa (“swan/gander”): apart from the literal meaning, this term also refers to the breath (prana) as it moves within the body; the individuated consciousness (jiva) propelled by the breath; see jiva-atman; see also parama-hamsa

Hatha-Yoga-Pradipika (“Light on Hatha Yoga”): one of three classical manuals on hatha yoga, authored by Svatmarama Yogendra in the fourteenth century

Hiranyagarbha (“Golden Germ”): the mythical founder of yoga; the first cosmological principle (tattva) to emerge out of the infinite Reality; also called Brahma

Ida-nadi (“pale conduit”): the prana current or arc ascending on the left side of the central channel (sushumna nadi) associated with the parasympathetic nervous system and having a cooling or calming effect on the mind when activated; cf. pingala-nadi

Ishvara (“ruler”): the Lord; referring either to the Creator (see Brahma) or, in Patanjali’s yoga- darshana, to a special transcendental Self (purusha)

Ishvara-pranidhana (“dedication to the Lord”): in Patanjali’s eight-limbed yoga one of the practices of self-restraint (niyama); see also bhakti yoga

Jaina (sometimes Jain): pertaining to the jinas (“conquerors”), the liberated adepts of Jainism; a member of Jainism, the spiritual tradition founded by Vardhamana Mahavira, a contemporary of Gautama the Buddha

Japa (“muttering”): the recitation of mantras Jiva-atman, jivatman (“individual self”): the individuated consciousness, as opposed to the ultimate Self (parama-atman) Jivan-mukta (“he who is liberated while alive”): an adept who, while still embodied, has attained liberation (moksha) Jivan-mukti (“living liberation”): the state of liberation while being embodied; cf. videha-mukti

Jnana-Yoga (“Yoga of wisdom”): the path to liberation based on wisdom, or the direct intuition of the transcendental Self (atman) through the steady application of discernment between the Real and the unreal and renunciation of what has been identified as unreal (or inconsequential to the achievement of liberation)